The world has loved, hated, and envied the US. Now, for the first time, we pity it.

The United States’ response to the Coronavirus has been marked by leadership failure, science denial, and political manipulation, such that, seven months into the pandemic, our country has had 6.5 million cases of the virus, and we are closing on 200,000 American deaths. According to the Republican National Convention, all of this is in the rear view mirror. According to reality, the virus continues to spread. As students go back to school this month — with the courts reviewing Education Commissioner Richard Corcoran’s order to open brick-and-mortar schools — health directors and epidemiologists forecast renewed ignition.

The journal Foreign Policy released a report gauging the performance of 36 nations in responding to COVID-19. The United States ranked 31st, ahead only of Indonesia, Turkey, Mexico, Iran, and China.

Senegal, a country of 60 million people ranking near the top of Foreign Policy’s list, has had only 14,000 cases and 284 deaths to date in this pandemic. The state of Florida, with about twice as many people, has nearly 50 times the number of cases. An American living in Senegal says that her Senegalese friends are flabbergasted that Americans are arguing over whether to wear masks and questioning the severity of the virus.

There hasn’t been a moment where my family was thinking that we should have evacuated. We always felt being here was the better choice.

America, for the first time in its history, is pitied and viewed with disdainful condescension. And the person at the helm — who the conservative commentator George Will calls “the most frivolous person ever to hold any great nation’s highest office” — has his hands off the wheel while our nation is on a downward spiral.

No, that’s putting it too passively. The nation’s floundering government is now administered by a gangster regime, and that’s not just America’s problem. Trump is emerging as a far-right cult figure in other countries, writes Katrin Bennhold, The New York Times’ Germany correspondent.

His message of disruption — his unvarnished nationalism and tolerance of white supremacists coupled with his skepticism of the pandemic dangers — is spilling well beyond American shores.

This really sticks in my craw. An “America first” tin-pot dictator modeling fascist behavior for a far-right German audience is the antithesis of the role of American president. It begs the contrast with another American president who spoke to a German audience. In his 1963 rock-star tour of Europe, President John F. Kennedy affirmed America’s solidarity with West Germany in resisting the Russians. “I am a Berliner.” Pro-democracy. Pro-NATO. Pro-allies.

My father represented our country in the US Foreign Service. In 1963, he was posted at the American Embassy in Rome, Italy, where he handled the press when President Kennedy visited a few weeks after being in Germany.

The plans went off without a hitch. Kennedy emerged alone from Air Force One, glamorous and handsome, waving to the small knot of observers. His open-air limousine was escorted by the handsome Carabinieri on horseback. He made his protocol visit to the Quirinale Palace, the seat of the national government. Kennedy’s call on Pope Paul VI came just days after his installation upon the death of John XXIII. The media noted this historic meeting between the first Catholic American president and the head of the Catholic Church.

From When the Dictator Flew Over Our House & Other True Stories, not yet published, Jane Kelly Amerson López

Like diplomats before and after him, my father’s loyalty was to the United States and its elected leader, regardless of policies or political party. It was not always easy — Dad came to disagree with the Vietnam War, which very much colored America’s overseas relationships — but being a diplomat today comes with unprecedented challenges. A July Democratic staff report to the US Senate Committee on Foreign Relations — Diplomacy in Crisis: The Trump Administration’s Decimation of the Department of State — concluded:

The President has undermined the United States’ role as a global leader, withdrawing from international organizations, agreements, and commitments, seeking to walk back our responsibilities to allies and partners, and retreating from leading the response to global crises.

Democratic Staff Report to the Committee on Foreign Relations, US Senate.\

The facts speak for themselves. Or, to quote Trump, “It is what it is.” We will vote in November. 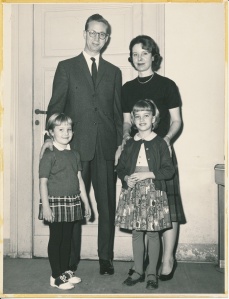