In 1960, Dad’s employer, the United States Information Agency, sponsored him for a year of graduate study at the Bologna Center, part of the Johns Hopkins University’s School for Advanced International Studies (SAIS). A change of post wasn’t in the cards. After four years in Caracas, we’d been in Milan barely nine months. Dad expected to take over as Director in the Branch Post the following year. After the late arrival of our things sent from Caracas across the Atlantic and settling us into an apartment, Mom had begun assembling a life, making her way in Italian in her daily rounds of shops and through interactions with Dad’s growing list of contacts. Attending La Scala, including hosting new diva Leontyne Price, was a delightful responsibility. We’d enjoyed family trips to the Italian Alps and the lake country north of Milan, taking the opportunity to get windswept on Lake Como and to raise a glass of aqua minerale over lunch. 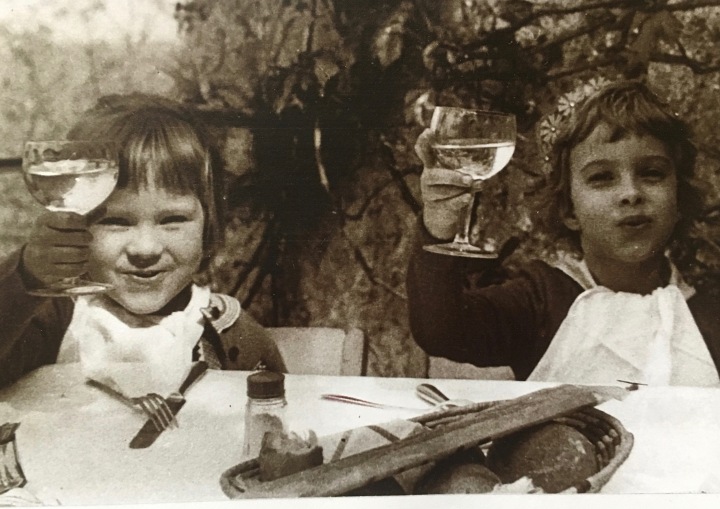 I was happy to have a real school and new friends from kindergarten at International School. And I’d just lost my first tooth.

Nonetheless, Bologna it was to be, and down the Autostrada we went in our little pale-blue Fiat 1100, “la millecento.” For housing, Mom and Dad opted for the downstairs floor of a hillside house on Via Putti where it was reported the Nazis had their regional headquarters during the War. The front of the house faced on a rose garden where long lines of hairy snails left shiny trails on the stone pathways. Susie and I were told there were old weapons behind a locked iron door in the wall at the end of the backyard. The only option for school was the original Maria Montessori school in a villa at the edge of town, a topic for a future blog: whatever creative spirit seems to govern the Montessori schools now in vogue in the States, it was completely absent in this rigid Italian system school in which I was the only American.

About half the 60 students at the Bologna Center with Dad were Americans, including second-year Master’s Degree students from the DC-based Johns Hopkins University SAIS, and the other half were mostly from Western Europe. Two other Foreign Service Officers were also enrolled: Dick Forschner, a specialist in consular affairs; and Tom Fina, whose career had concentrated on Europe, especially Italy. Tom and Eleanor Fina became life-long friends of my parents and I am fortunate in having stayed in touch with them to this day.

The Bologna Center courses focused on the Common Market and European Integration, major foreign policy themes for most countries in these post-WWII years. Among the year’s field trips was a visit to West Berlin for a first-hand view of the political realities of Cold War tensions just months before construction of the Berlin Wall was begun. It had been only ten years since the Soviet secret service had closed Sachsenhausen, where they’d imprisoned 60,000 men, women and children after the War. Dad recalled as pretty dramatic visiting military barracks where growing numbers of East German refugees seeking freedom in the West were being temporarily housed. He was fighting a flu bug but didn’t want to miss out on the opportunity to see East Berlin with Tom: they crossed the Brandenburg Gate line and “walked for hours along the barren streets of that forlorn city” before taking the tram back to their haven in West Berlin.

Fifty-six years later, in August of this year, Ray and I were in Berlin on the afternoon of our third Baltic Sea cruise day. We had spent the morning at Sachsenhausen, enveloped in the spiritual darkness of the concentration camp, despite the warm sunny day.

I was surprised, and gladdened, at the loveliness of Berlin, a city of parks and beautiful buildings, and then I realized that my mental images of the city were post-War black and white photos.

After a delicious lunch of wiener schnitzel and apfel streusel, we retraced some of Dad and Tom Fina’s trip as we crossed the brick line boundary
marking the split history of a now reunified Germany.

Just past the Brandenburg Gate, in what was East Berlin in 1961, we saw the American flag flying over our Embassy. 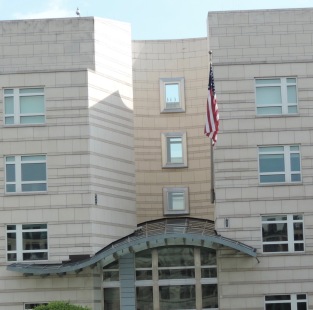 Some sections of the Wall that began to be built to lock in East Germans the year of Dad’s visit to Berlin remain, vestiges of another time to not be forgotten. 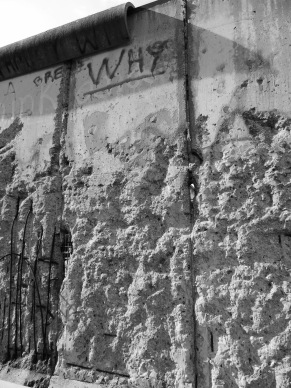 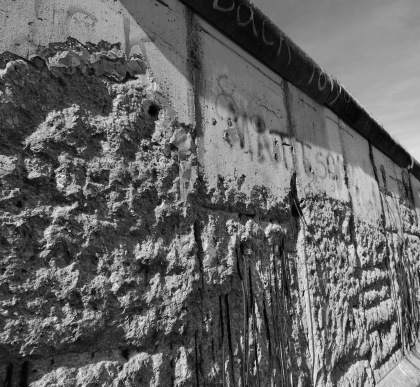 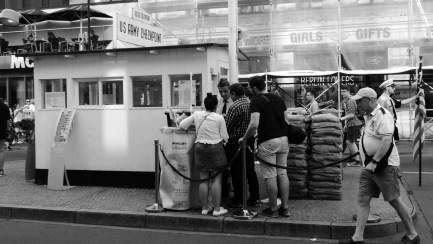 The pictures from the Soviet era present a strong contrast to today’s tourist-friendly hut and its photogenic military guards.

A different photograph at Checkpoint Charlie – of a young President Kennedy and USSR leader Nikita Khrushchev – pulled at another family memory. At the end of the Bologna Center academic year, Dad had an additional opportunity to observe the dynamics of the Cold War: the June 3-4, 1961 summit in Vienna, Austria between the new American President and Khrushchev at which this picture was taken.

Dad volunteered to work at the press center in handling the hundreds of expected reporters, and the Embassy in Rome gave the nod. The four of us traveled north through Trieste and Yugoslavia before arriving in Vienna, where Dad “got in some useful and educational work in the palace, observing press briefings involving journalistic luminaries and government types.”

Although he later wrote that Mom, Susie and I rode on the famous huge ferris wheel, the only recollection I have of the trip is being in a crowd on the street looking up at President Kennedy waving from a balcony.  Today, I discovered that I was looking at the Hotel Schloss Wilhelminenberg, where brunch is served on the balcony these days. 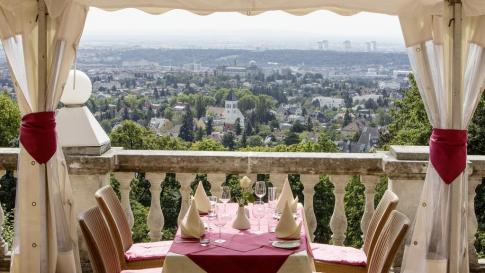 The optimism around President Kennedy’s administration in 1960 stands in stark contrast to the concern we feel about the current inhabitant of the White House, including the nature of the relationship between Trump and Russian leader Putin. We knew where America stood in the Cold War that underlay Dad’s Foreign Service career: the leader of the Western Bloc; the advocate of democracy, a free press and human rights. As he demonstrates in daily pronouncements, Trump has no use for these bastions of American life.  Senator John McCain said last night in his acceptance speech for the Liberty Medal that to “abandon the ideals we have advanced around the globe” and “refuse the obligations of international leadership … for the sake of some half-baked, spurious nationalism cooked up by people who would rather find scapegoats than solve problems” is unpatriotic.

I know Dad and Mom would say: Amen.